Two new pieces on the way – “Collection” will be in The York Journal and “As Beautiful Things Always Do” in the York Literary Review. If there’s such a thing as a York literary scene, it seems to be me. If you can’t wait, you can read my blog post “A Handstand on the Wall” to tie in with “Collection”

“Mozart’s Earworm” is still available in the winter 2020 edition of The First Line:

He told of hothousing, training and selection of those with the highest vocal range, and he told of how he discovered that he had a talent that separated him from many of his peers.

“I could sing, and no one could hear me,” he said.

“This part of the song was not for men. We sang to angels.”

One of my One Hundred Pieces of Millia Maslowa – piece 13 at the moment – is available on Trembling With Fear as “Enzymes”:

As natural meat died out and factory meat became an everyday essential, people were slow to discover that they could only digest the meat from particular companies. Those companies were shut down once the authorities realized, but it was too late – the enzymes in our digestive systems had been adapted to particular brands.

My story “Athanatophobia” can be found in the Write Festival Science Fiction Anthology where it was a runner-up in their competition:

“It’s not a punishment. It’s just the deal. We stopped dying, so the population increased. More people using up the world’s resources, and filling it with our waste. This is a marvellous solution–divide the immortal population in two, and put each half in suspended animation every other day. Everyone lives forever, but only half of us at any one time. We’re all happy, including the environment.”

“Then why do you sound so bitter about it?”

“Because the two halves can’t meet.”

I gave a bitter laugh. “She found out. She found out that she was an experiment, and devised a way to ruin it. She arranged that after her death her body would be split up and sold off as souvenirs to collectors. I think she meant it as an insurance policy, to make sure they didn’t move the experiment along too quickly. She didn’t know she was dying; neither did anyone else. By the time the family turned up for the body, it was in pieces, being shipped all over the world. You’ve got to love her; she didn’t just stop the family, she made an absolute mockery of them.”

“And you’re trying to gather them up and put them together again.”

You can read a Q&A with Blood Bound Books about “One Survivor” here.

There’s also an interview here with Mad Scientist Journal about my story “Touch the Earth”.

You can buy my novel On Wings of Pity from Amazon, and my collection The End of the World: A User’s Guide for only £7.99. 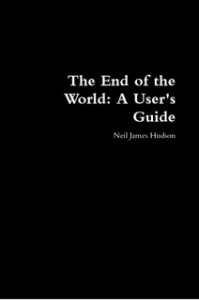